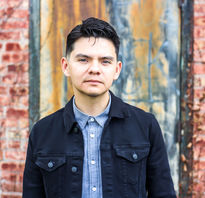 Alex E. Chávez is the Nancy O'Neill Associate Professor of Anthropology at the University of Notre Dame, where he is also a faculty fellow of the Institute for Latino Studies. His research and teaching explore Latina/o/x expressive culture in everyday life as manifest through sound, language, and performance. He has consistently crossed the boundary between performer and ethnographer in the realms of both academic research and publicly engaged work as an artist and producer. He has published widely—including in the Journal of Linguistic Anthropology, Latino Studies, and the Latin American Music Review—has contributed to numerous prominent volumes (Celebrating Latino Folklore: An Encyclopedia of Cultural Traditions (2012), Iconic Mexico (2015), Latino, American, Dream (2016 Texas A&M Press), Making Sense of Language: Readings in Culture and Communication (2016 Oxford University Press)), and his writing has also been featured in public venues such as the Huffington Post and Revista Contratiempo.

His book Sounds of Crossing: Music, Migration, and the Aural Poetics of Huapango Arribeño (Duke University Press, 2017) is the recipient of three book awards, including the Alan Merriam Prize from the Society for Ethnomusicology (2018), the Society for Latin American and Caribbean Anthropology's Book Prize (2018), and the Association for Latina and Latino Anthropologists Book Award (2018)—read more here. Supported by the National Science Foundation and the Ford Foundation, Sounds of Crossing represents the first extended study of huapango arribeño music and explores how “Mexican sounds”—as a locus of aesthetic behaviors, performative acts, and signifying practices—resonate across physical, aural, and cultural borders and what they reveal about transnational migrant lives lived across them.

In 2016, he significantly extended the reach of this research through collaboration with the Smithsonian, serving as lead producer of a Smithsonian Folkways recording of huapango arribeño entitled Serrano de Corazón for inclusion in the world-renowned Tradiciones music series.

An accomplished musician and multi-instrumentalist, Chávez has recorded and toured with his own music projects, composed documentary scores (most recently Emmy Award-winning El Despertar [2016]), and collaborated with acclaimed artists—including Antibalas, Grammy Award-winners Quetzal and Grupo Fantasma, and Latin Grammy Award-nominated Sones de México. At present, he serves as a Governor for the Chicago Chapter Board of the Recording Academy.

Currently, he is co-editing two volumes. The first is provisionally titled Latino Aesthetics in the Global Midwest—a project that grows out of a collaborative research grant funded by the Mellon Foundation. The second grows out of an Advanced Seminar at the School for Advanced Research in Santa Fe, New Mexico, which he co-chaired in Spring 2019 on the topic of “Ethnographies of Contestation and Resilience in Latinx America.” In addition, he is curating the liner notes for the forthcoming 8th studio album by Quetzal, which is to be released on Smithsonian Folkways Recordings, and is producing the fourth-studio album by the hip-hop artist Olmeca.

For more about his work, visit his website: www.aechavez.com