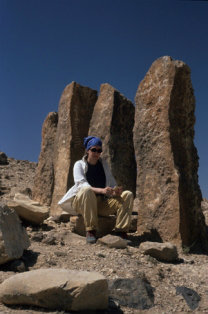 
An anthropological archaeologist, Chesson focuses on the materiality of daily life in the past. Chesson has directed or participated in archaeological projects in Jordan, Canada, United States, Cyprus, Israel, Ireland, and Italy. Her edited volume Social Memory, Identity and Death(2001) presents ethnographic and archaeological studies of cultural memory and mortuary practices, and she has served as co-editor for an issue of Journal of Mediterranean Archaeology. She has published in the Journal of Anthropological Archaeology, Levant, Paleorient, and in several edited books. She currently works as publication co-editor on final reports of the Expedition to the Dead Sea Plain's excavations at Bab adh-Dhra`, Fifa, Numayra, and Khirbat Khanazir (Expedition to the Dead Sea Plain). She has held Wenner-Gren and NSF grants, and is expanding her research to Italy with the Bova Marina Archaeological Project, co-directing with John Robb, Lin Foxhall, and David Yoon (Bova Marina Archaeological Project).