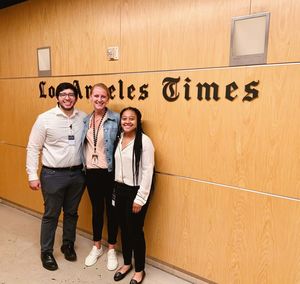 Ever since high school (and perhaps earlier, as a pink spiral notebook from 2005 suggests), I’ve wanted to be a journalist. I love being informed about the community around me, I love talking to a wide range of people, and I love the adrenaline and excitement of pursuing a story.

Coming to Notre Dame, I knew that there wasn’t a journalism major. However, it didn’t take me long to land in anthropology.

As an aspiring journalist, I think that anthropology is the perfect field to study. In many ways, the disciplines are similar. Anthropological ethnographies require interviews and observation, just like writing a news article. Similar ethics when building trust and remaining objective apply to each field. Both help me remain informed about the community and allow me to talk to people different from myself. 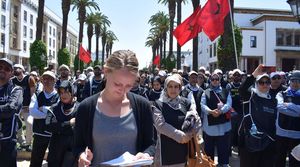 But in key ways, anthropology is different enough that it’s helped me become a far better journalist.

My anthropology classes allowed me to study, deeply, the history of the field — the wins and the failures. Very early on, I learned the importance of keeping a critical eye on my work. By identifying shortfallings of ethnographies in class, I became much better at seeing the areas for improvement in my own work, before it was published. Plus, in anthropology, we analyzed past failures to learn from them, not to admonish them. In journalism, we do the same.

The diversity of classes in the anthropology department also helped me build new foundations of knowledge. In my biological anthropology class, I became more equipped to understand evolution and the relationship between people and animals. In my class on the Anthropocene, I gained the information necessary to succinctly and intelligently explain climate change. In my linguistic anthropology class, we discussed how language can both unify and divide people, and I learned, definitively, just how important word choice is. As a journalist, that’s an essential understanding to have.

The summer after my sophomore year, I interned on the health and science desk at the Philadelphia Inquirer. I had just finished my biological anthropology class, where I had the chance to read dense research papers quickly and pare them down to more understandable language. At the Inquirer, I was doing the same. 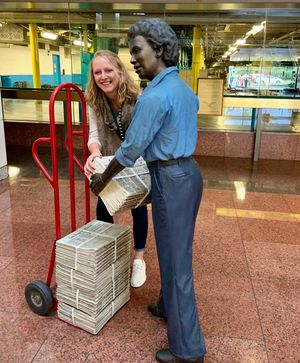 A few months later, I studied abroad in Morocco where I did reporting on maternal health care. Once again, I felt the disciplines collide. My reporting would have been impossible if it weren’t for the many cultural and linguistic lessons I’d received in my anthropology courses.

After my junior year, I interned on the social media team at the Los Angeles Times. The work couldn’t have been more different that what I did at the Inquirer, but anthropology prepared me all the same. On the social team, I would switch subject matter on a dime; one moment, I’d be reading and tweeting out a breaking news story about earthquakes. The next, I’d be crafting an Instagram story for a feature piece on immigration. The role was ever-changing and varied, and reminded me of the breadth of courses I’d taken in anthropology.

What I love about anthropology is what I love about journalism. The field is far-reaching and diverse, and I get to become a bit of an expert on many different topics. The information and the values I learn in class impact me directly in my journalistic work. So when I step into the field of journalism after graduation, I’ll not only benefit from my learning in the Gallivan program in Journalism, Ethics and Democracy, but also from the many lessons in my anthropology major.