For decades, scientists have considered race to be a biological category that could predispose someone to certain diseases.

Jada Benn Torres believes the issue is more complicated. Molecular anthropology, she contends, can help offer a clearer picture of why some people get sick and others don’t.

“I am hoping, ultimately, to get biomedical scientists and social scientists working together to understand these variables, like race, that we use as risk factors for diseases,” she said. “The whole idea is to move away from labels that don’t make much sense biologically.”

Benn Torres, an assistant professor in Notre Dame’s Department of Anthropology, is researching uterine fibroids, a common health problem for which race is listed as a risk factor. Fibroids can impact women’s quality of life and reproductive health and affect African American women more than other groups in the U.S.

“What are the biological mechanisms behind race that make one more susceptible to this?” Benn Torres said. “I am trying to unpack the nature of that disparity.”

New studies on childhood obesity, for example, show no biological mechanism at play. Instead, environmental factors like poverty have more predictive value.

In the case of uterine fibroids, Benn Torres’s preliminary data indicates a correlation with genetic ancestry, she said. But ancestry and race are two very different things.

This distinction is important, as women who do not self-identify as African American could still have ancestors from West Africa and may not realize they are at risk. 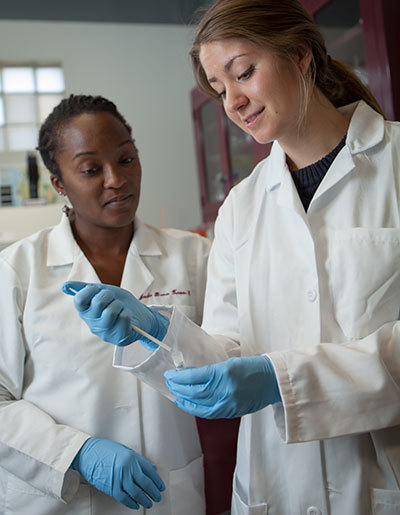 Torres (left) in the lab with a student.

“If there is indeed some connection between having shared ancestry from, in this case, West Africa and uterine fibroids,” Benn Torres said. “that to me would be a more satisfactory answer.”

Benn Torres, whose parents both came to the U.S. from Trinidad, is hoping to expand her study to include women in the Caribbean. This project would allow her to consider how lifestyle factors—like diet and activity level—also affect the distribution of the disease.

In another area of her research, Benn Torres focuses on the historical relationship between the native peoples of the Caribbean and enslaved or self-liberated Africans.

As a Caribbean coordinator for National Geographic’s Genographic Project, she uses genetic data to learn more about the ancestry of indigenous peoples in the Caribbean. Her research, published last year, found evidence of indigenous ancestry in maternal and paternal lineages in two communities in Trinidad and St. Vincent.

“Typically, the narratives you read are that all the native peoples were killed shortly after the arrival of Columbus and other European colonists,” Benn Torres said. “But what we’re seeing now, within the last 10 to 20 years, is different. We’re seeing resurgence movements where people are asserting their indigenous ancestry.”

In addition to bringing her research into the classroom, Benn Torres encourages her students to become involved in her work.

In a project on the indigenous ancestry of Maroon communities, one undergraduate traveled with Benn Torres to Jamaica to collect data, and two others worked with her in the lab on data analysis. Their results were published in the American Journal of Human Biology.

By discussing race and ancestry alongside the genetic data she has uncovered, Benn Torres gives students the chance to re-examine and challenge their own ideas.

“This research allows us to appreciate human variation and to question some of the ideas we’ve been taught about how people are different,” she said. “And, perhaps, that’s not as important as thinking about how we’re the same and how it’s our environment and behaviors—which we can change—that affect our health and well-being.”