The Notre Dame Department of Anthropology "would be a gem at any university in the country," a trio of outside experts says. 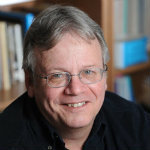 "The level of student involvement in undergraduate research is, frankly, astounding to us," the report continues. "We know of no other institution in the country that produces such an outstanding record in anthropology of student research publications and presentations."

Teacher–Scholars
The external reviewers also highlighted the faculty's blend of research and effective teaching, writing that it "epitomizes the teacher-scholar model."

"Clearly, the faculty's intense involvement in undergraduate education has not prevented their engagement in research. For most of the faculty, the two have gone hand in hand," the report says.

Chair Mark Schurr says his department and the entire University emphasize the importance of faculty who are teacher-scholars.

"Sometimes people have this idea that research universities are poor with teaching but great with research and that undergraduate departments are good at teaching but not really much involved in research," he says. "That's definitely not the case for us. We are doing research that's as good as research anywhere—and we're doing that while we deliver a truly excellent undergraduate major. The reviewers agreed that the faculty in our department are as good or better than those at many other excellent departments—even ones that have strong graduate programs."

Indeed, when asked to name the department's chief strength, reviewers say "the entire undergraduate department," adding that it "has characteristics of a high-quality graduate program at the Master's degree level."

Positive Progress
The decennial review process is a prime opportunity not just to assess the department's current status, but to consider what changes might take it to the next level, Schurr says.

When reviewed in September 1990, the department was mainly a socio-cultural anthropology department, he says. "In that review, they suggested we add positions to bring in other subfields, especially archeology and bioanthropology. The University gave permission to do that, and it led to an enormous amount of growth."

Now, Schurr reports, about 60 percent of the faculty are women. Of the six most recent faculty hires, 50 percent were minorities and 67 percent were women, in addition to 67 percent being Catholic. "We look more like our students and more like the world at large," he says.

Continuing Excellence
Since that last review, the department has also stabilized its number of majors and minors at about 300 and focused on developing undergraduate research involvement.

"The big question for us now," Schurr says, "is what's the future for our department? What's the next step?"

No matter what innovations or changes the department implements next, he says, this latest peer assessment is a welcome validation.

"We always thought that we had a really outstanding undergraduate anthropology program—one of the best in the nation," Schurr says. "It was really gratifying to have three top scholars from major institutions come in and use words like 'astounding.' It's a reality check that yes—the things we are doing are exceptional."