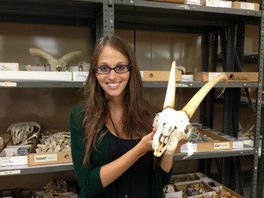 This summer, I worked at the Smithsonian Natural History Museum’s Archaeobiology Laboratory, focusing on the faunal analysis of a collection of bones excavated from the Epipaleolithic roundhouse settlement of Hallan Çemi, an 11,000-year-old site in the Zagros Mountains of southeastern Turkey.  Our goal in studying this collection of animal bones was to determine whether or not goats, sheep, pigs, and bovines had been domesticated yet in this region of the Fertile Crescent.  The markers of domestication- from smaller stature to specific gender and age profiles of butchered animals- can all be seen through careful study of bones.  Having barely any background in faunal analysis, this internship was an intensive hands-on learning experience for me.  The first day I came into the lab, my boss, Melinda Zeder, stationed me in front of a table covered with fragmented sheep and goat bones and told me to separate them into element.  After much trial and error, I went from this first day of faunal analysis to, ten weeks later, opening up a never-before touched bag of bones from the site and identifying and recording the scraps of bone it contained, with everything from bear and elk to fox and turtle represented.

As an aspiring archaeologist who plans on attending graduate school in the fall of 2014, I found this internship to be invaluable for my future career.  Learning how to work in an environment with other interns- learning from them, asking them for help, and not being afraid to offer constructive criticism on their own work- is a great skill to have in general, but especially for archaeologists, who work in groups constantly.  The hands-on nature of the work I was doing also ensured that there was never a dull moment.  The thrill of finding part of a bear ulna or a polished and carved elk horn was never lost on me, even after ten weeks of doing the same thing.  In the end, my time with the Smithsonian made me feel like I really contributed to an important project, one that will give tremendous insight into the history of animal domestication and the Neolithic Revolution in the Fertile Crescent.