Here is the grant report I wrote for Nanovic for my summer experience doing research in Bulgaria":  When I began my most recent research trip in Sofia, Bulgaria this June, I had certain expectations for what types of information I would receive from interviews, participant observation, and oral histories. These expectations came from two previous field seasons in Bulgaria, during which I studied the relationship between economic status and nostalgia for communism. These expectations grew because of the strong indicators I noticed from data I had previously collected; I hoped, with this third and final field season as an undergraduate, to be able to make generalizations about nostalgia and socioeconomic status with the completion of this third trip. With this final trip, I spent three weeks in the cities of Sofia, Rousse, Gabrovo, and the tiny village of Vlaychevtsi in Bulgaria, as well as in Giurgiu, Romania. During this time, I continually observed and documented the behaviors, attitudes, and conversations of my Bulgarian informants. In addition to three full weeks of participant observation, I conducted four structured interviews that all lasted approximately 1 hour in duration. The Bulgarians with whom I spoke expressed an overwhelming interest in participating in an interview, but because I was limited on time, I was only able to conduct four in-depth interviews. Because of time constraints, I emailed to willing participants a detailed questionnaire regarding everyday life in post-socialist Bulgaria. I have yet to receive responses from several individuals, but I can at this time report that my initial expectations were, for the most part, correct.

During my previous field seasons in Bulgaria, I observed that affluent members of society tend to express less nostalgia than those who struggle financially. I continued to observe these particular attitudes with my third field season, however the specific source of this nostalgia is not as easily generalizable as I had hoped. Largely, those who experience strong senses of nostalgia are pensioners, or retirees that receive their current income through monthly direct deposits from the State. By and large, these monthly payments range from $150-$300 per month—barely enough to pay essential bills, let alone purchase food or other necessities. In December 2010, I was introduced to a family that was in such a financial situation that they could barely afford their heating bill, let alone other necessities.

Over the course of the past two years, I have been studying a single family and their attitudes towards the past. During this most recent research trip, I noticed that this family had changed greatly in regard to their socioeconomic status. The father, who is a 62-year-old pensioner, began working as an accountant for his 20-storey block of flats. By working he was able to earn enough money to purchase new consumer goods, such as a new laptop computer and 42” LCD television. He is incredibly prideful of his ability to purchase these items, which he could have never afforded even one year ago. Because of his bleak economic status, he was once incredibly pessimistic about the future; now that he has seen financial gains and an improvement in social status, he is now overwhelmingly optimistic. Similarly, his attitudes towards the past have also changed. Where he once lamented the loss of governmentally insured financial security, he now praises the new democratic government and the abundant opportunities for financial growth. This led me to pinpoint a topic of focus for my Anthropology Honors thesis – the ways in which the present alters our memory of the past. This is a critical issue to ethnographers, historians, and anthropologists alike, as issues occurring in the present often confound memories of the past; memory is not 100% objective. It is critical that ethnographers recognize the subjectivity that comes into play when individuals attempt to remember and retell the past. 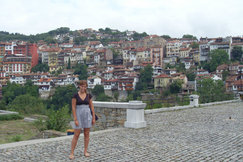 My experiences in Bulgaria over the past 2 years have strongly influenced my goals for the future. I am currently in the process of applying for a yearlong research Fulbright to Bulgaria, as well as applying to several Anthropology PhD programs in the Midwest. I have high hopes for the continuation of this research project, and hope to utilize my undergraduate honors thesis as the foundation for a PhD dissertation. Through my 3 field trips to Bulgaria, I have witnessed my research question evolve from an interest in consumerism to a genuine concern about the nature in which ethnographic research is conducted. From my experiences interviewing individuals about sensitive, contemporary topics, I have noticed that there is an intimate relationship between a person’s current situation and the ways in which they remember the past. Memory is, as I said before, highly subjective, and it is critical to bear that in mind if one wants to conduct honest, meaningful ethnographic research. I feel that, of all the lessons I learned from my experiences in Bulgaria, this insight is by far the most significant; I will always bear this notion in mind as I analyze my interviews and begin preparing to write my honors thesis.