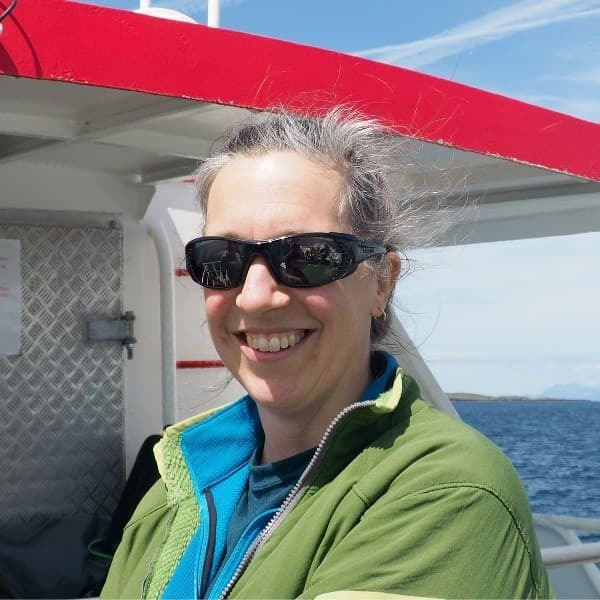 As an anthropological archaeologist, Chesson’s chief interests center on the way human beings of the past and present construct and experience difference in their daily lives. Overall, she seeks to understand how people confront everyday challenges and the extraordinary changes throughout their lifetimes by investigating peoples’ built environment, the objects with which they surround themselves, and how they treat their dead.

Since arriving at Notre Dame in 2000, Chesson has become involved in three major projects:
1. Her involvement with the Expedition to the Dead Sea Plain (EDSP), of which she now serves as Co-Director with Dr. Morag M. Kersel (DePaul University), emerged from her dissertation research. This decades-long project investigates the earliest emergence of small-scale urbanism (or more appropriately for this area, townism) during the fourth and third millennia BCE (e.g., Early Bronze Age (EBA), c. 3600-2000 BCE) in the southern Levant (modern Jordan, Palestine, Israel, southern Syria, and southern Lebanon). Chesson is fascinated by the transformations in EBA peoples’ lives when they moved from unfortified villages, hamlets, and farmsteads into the earliest walled towns and cities. She recently published the final report for the excavations at the sites of Numayra and Ras an-Numayra, and continues working now on archival research to prepare for the final publication of the EDSP’s excavations in three EBA cemeteries on the southeastern Dead Sea Plain of Jordan (http://expeditiondeadseaplain.org/ and https://followthepotsproject.org/).

2. Chesson directed three excavation seasons (summers 2007-2009) at the Final Bronze Age site of Sant’Aniceto (c.1200 – 900 BCE) in southern Calabria as part of the Bova Marina Archaeological Project. Her team investigated daily life in this protohistoric hamlet to establish the material footprint of peoples’ everyday lives before Greek colonization in the 8th century BCE. In 2019 they published an article on Sant’Aniceto in the Journal of Field Archaeology, and she is working on completing the final site report to be published by the McDonald Institute at Cambridge University. More recently, she shifted my fieldwork focus to post-medieval contexts: 18-21st centuries rural communities in southern Calabria. After finishing their fourth field season in 2018, they published two journal articles on this research in the Journal of Mediterranean Archaeology and Archaeologies. Currently, they are working on the final survey report for publication by the McDonald Institute at Cambridge. During the next season in 2022 the team hopes to shift our survey focus from the lowlands of the San Pasquale Valley to the upland terraces above 600 masl to build a comparative basis for considering sustainability in this neighboring, but environmentally and geographically different, zone. (https://www.arch.cam.ac.uk/research/projects/current-projects/bova-marina-archaeological-project-progetto-archeologico-bova).

3. As part of Notre Dame’s Cultural Landscapes of the Irish Landscape (CLIC), she conducted an ethnoarchaeological project in western Connemara from 2011-2019, investigating the ways that people today and in the past use(d) dressers (e.g., hutches) to store and display delph (ceramic and glass vessels) and other heirlooms to transform their houses into proper homes. Chesson is currently working on writing a book about her findings.