2017 University Awards within the Department of Anthropology 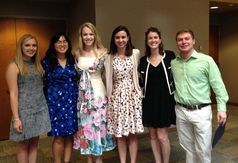 The Irwin Press Paper Award in Medical Anthropology - Established in 2001 by emeritus faculty Irwin Press, this award recognizes the best paper in medical anthropology submitted by a graduating senior. The recipients for 2017 were Cindy Do and Elizabeth Pagura.

Father Murray Integrative Anthropology Paper Award- Anthropology is the study of the human, writ large. But it is too often divided into a multitude of discreet ways to think about the human experience. Integrative anthropology is a broad-scale and generous anthropology, where diverse theoretical and methodological toolkits have the potential to merge, meld, deviate, and entangle. Papers in this area can cross traditional boundaries and draw from a range of different areas of scholarship in their efforts to develop a fuller, even if sometimes messier, understanding of being and becoming human. The recipient for 2017 was Hannah Legatzke.

The David Huffman Scholar/Athlete Award- This award is presented to students with outstanding performance in the anthropology major and in athletics. In 2017 the recipient was Eva Niklinska.

The Julian Samora Award - This award is presented to an outstanding senior  who has demonstrated broad engagement with academic life. In 2017 the recipient was Emily Campbell.

The Peter Brown Professional Achievement Award- To the anthropology student with outstanding performance in the tasks of a professional academic in one or more of the following arenas: publication, presentation at professional meetings, grants, fellowships. The recipient for 2017 was  Adam Pasquinelly.