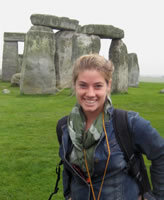 Four years ago, I was a nervous freshman in flip-flops and a sundress trying desperately to find a seat in Professor [James] McKenna’s crowded Introduction to Anthropology class at Notre Dame. Still breathless from my circuitous journey from Lyons to Haggar Hall, I was unaware that such a hapless beginning had irrevocably set my feet upon the winding path toward a future in anthropology.

And a winding path it would be, as shown when a bemused Professor McKenna decided, mid-lecture, that students sitting in aisles and leaning against walls did not make for the best learning environment and spontaneously led us in search of a larger classroom. This trek ended in the library auditorium, where for the next semester we would sit, ensconced in comfy seats and enveloped in dim lighting, while Professor McKenna opened our eyes to the many potential directions we could take within this field.

Never good at making decisions, I initially chose anthropology because it seemed to have a bit of everything—science and the humanities merged into one—but as the number of footprints behind me grew, the path in front of me also grew clearer. I began to love the way anthropology prompts “aha!” moments and sheds new light on topics, ideas, and situations that never would have filtered into my consciousness otherwise.

Classes in the Department of Anthropology were full of those moments; I would leave weekly meetings with Professor [Agustín] Fuentes searching for someone to corner, just to share my intellectual excitement.

Fascinating classes, combined with research and faculty guidance, helped me leave behind the simple answers. They taught me that anthropology is actually a way of thinking—questioning the world around us and refusing to take accepted answers for granted.

Although I had come a long way since that first intro class, I still had no idea I would pursue anthropology after graduation. That is, until the spring of my senior year when Professor McKenna pointed out a route I had not yet considered: a one-year master’s in evolutionary medicine at the University of Durham in the United Kingdom. The director of that program, Professor Helen Ball, was coming to speak at a conference on campus, and he arranged for us to meet.

Suddenly, that year after graduation looked far less scary and much more exciting; after all, who would really say no to a year in England?

It was the interests and knowledge that the Notre Dame faculty had instilled in me, along with their dedication to students and vast network of contacts, that made this master’s in anthropology an option for me. And while jumping across the pond for a year was daunting, my liberal arts education at Notre Dame and a semester studying abroad in Uganda made it seem like one more bend in the wonderful road.

For those unfamiliar with the emerging field of evolutionary medicine, it stems from the concept that our bodies have been influenced by millions of years of evolution and that this should help inform the way we approach clinical medicine. Notre Dame is lucky to have Professor McKenna, who, along with Helen Ball and many other Durham professors, are some of the leaders in changing the way doctors think about health and disease.

For example, what looks like pathology may just be an evolved defense mechanism of the body. Though most doctors know that fevers are a perfect example of this, fewer know that anemia or a reduced level of iron in the blood may also be an evolved protective response to pathogens, and prescribing iron supplements to those with chronic infection may lengthen the time of infection (Nesse and Williams 1998).

It is discoveries like this that continue to bring me those “aha” moments and teach me to think beyond the accepted answers, a process that all started in that first introductory course in the library auditorium.

As I consider my next steps, I know that my love of learning and questioning—refined by my experiences in the Department of Anthropology—will hold me in good stead whether I choose to continue in applied anthropology or move into another field such health policy that will require an even stronger commitment to challenging the status quo.

I have realized that, thanks to Notre Dame, wherever I go, whatever I do in life, I am and will always be an anthropologist.

Written by Neva Lundy, a master’s student currently studying evolutionary medicine at the University of Durham in the United Kingdom and working to encourage other students to do so, as well. She was also winner of the 2011 University of Notre Dame Paul Farmer Applied Anthropology Award for using anthropological training for public service and the 2011 University of Notre Dame Irwin Press Prize in Medical Anthropology for a paper called “Health Disparities in St. Joseph County: Black Women and Breastfeeding.”