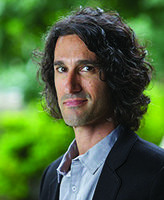 More than 300,000 years ago on an Indonesian island, some humanlike-being scratched intentional lines in a clamshell.

“What does that mean?” Fuentes asks. “When do we start seeing material evidence of people making meaning of the world around them?”

The professors believe that these marks—as well as cave paintings and other artifacts with symbolic meaning—are key to understanding the evolution of wisdom.

“We’re really interested in understanding how humans became as complex as we are,” said Fuentes, professor and chair of the Department of Anthropology, “and how we navigated through our deep evolutionary history to get to where we are today.With a $1.8 million grant from the John Templeton Foundation, they will co-direct the transdisciplinary Human Distinctiveness Project, seeking to advance research at the intersection of theology and evolutionary anthropology.

“We think there’s something called wisdom that gives us some insight. So we’re looking at theological, philosophical, biological, anthropological histories and ideas and trying to extract from there some way to tell what happened.”

Hints of the Transcendent

The three-year project will support training for theologians in evolutionary and archaeological anthropology, as well as research on the evolution of wisdom.

It will include two intensive summer seminars, up to five annual research fellowships, and up to three new scholarships for graduate students in theology. The grant will also support three current theology graduate students and one postdoctoral researcher in each of the two disciplines.

Wisdom has long been on the minds of theologians, said Deane-Drummond, a professor in the Department of Theology, as it is an essential part of the “burning distinction” between the divine and the earthly.

“It’s a way of bridging theology and science, because science is about the earth and understanding the material world,” said Deane-Drummond, who has a degree in natural sciences and doctorates in both systematic theology and plant physiology. “Theology is about understanding our connection with God and how we are, as human beings, in the image of that God.”

Fuentes and Deane-Drummond suggest that prehistoric artifacts may contain hidden signs of a shift from merely “pragmatic forms” of wisdom—such as making tools for functional purposes—to something more going on in the mind. The transition appears to have happened much earlier than previously thought, which is changing theories of human evolution.

“That leads to further questions in theology,” Deane-Drummond said. “Are we to say that the image of God is also in some of these earlier hominids who seemed to have these capacities? Some hints of the transcendent may be happening in these very early humans.”

The project will also feature a working group on the Notre Dame campus, with faculty experts from American studies, history, philosophy, biology, and philosophy of science, in addition to theology and anthropology, meeting regularly to discuss research findings.

“Different disciplines will all have their own understanding of what wisdom is,” Deane-Drummond said, “but I think that wisdom is a unifying force rather than a splintering force.”

Fuentes and Deane-Drummond agree that the University is an ideal home for such research.

“Notre Dame is the place for the science-theology dialogue, which it should be,” Fuentes said. “And Celia Deane-Drummond is absolutely the right person to see this forward. This grant—along with other projects she has in the works—set the stage for a new way of doing science and theology in collaboration, while training people to think about these disciplines in innovative and fresh ways.”

Allowing anthropologists and theologians to engage in these issues together has the potential to change the landscape of both disciplines, Fuentes said.