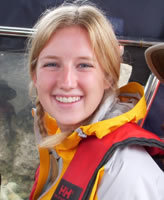 The oldest and arguably most competitive of its kind in the United States, the NSF’s Graduate Research Fellowship Program provides three years of funding, international research and professional development opportunities, and the freedom to study at any accredited graduate institution in the United States.

Collin McCabe ’10, a dual-degree graduate in anthropology and biology, is using his fellowship to pursue a Ph.D. in human evolutionary biology at Harvard, where he studies cultural and epidemiological transmission dynamics and evolution. Claire Brown ’11, who studies the heritage and socioeconomic impact of native pony breeding in western Irish communities, chose the State University of New York at Binghamton’s Ph.D. program.

Both students say their robust research experiences as undergraduates helped their NSF applications stand out.

“To get this fellowship, you have to have a very strong idea of what kind of research you want to do at the graduate level,” Brown says.

At Notre Dame, Brown worked closely with Professor Ian Kuijt on his Cultural Landscapes of the Irish Coast project, a multiyear, inter-institutional study of coastal western Ireland that includes archaeology, ethnography, and oral history collection. She traveled to Ireland three summers in a row to conduct research with Kuijt’s team, focusing on the abandoned island of Inishark.

Brown’s own research, she says, stems from those experiences. “While I was there the summer after my freshman year, I noticed that pretty much every field around the town of Clifden, where we were based, had a Connemara pony in it. I’ve ridden horses since I was about seven, so I was really interested why this seemed to be such a huge part of this community.”

To help answer that question, she obtained grants from the University’s Nanovic Institute for European Studies and the Undergraduate Research Opportunity Program (UROP) in the College of Arts and Letters’ Institute for Scholarship in the Liberal Arts.

The resulting senior thesis, “The Commodification of Heritage: The Changing Role of the Connemara Pony in Western Irish Society,” examined the extent to which social networks are created by animal breeding, thereby shaping rural social life.

“Over the last 30 years,” Brown says, “the role of the Connemara pony has changed from an economic commodity bred for agricultural tasks to one in which the pony is a physical and symbolic reflection of regional Irish heritage and status.”

Animals also inspired McCabe’s research, which focuses on primates. “I’d always wanted to study monkeys, but I didn’t know how one went about that academically,” he says. “I found out all of those classes were generally in the Department of Anthropology.”

Working with Agustín Fuentes, the Nancy O’Neil Chair in Anthropology, McCabe traveled to Gibraltar on a UROP grant the summer after his junior year to work on a team research project about the seasonal ecology of the local Barbary macaques. While there, McCabe also conducted an independent study of the distribution of parasites throughout the monkey population in the Upper Rock Nature Reserve. “That led to what I am studying right now: disease ecology,” he says.

Supported by funding from the Nanovic Institute, the College of Science, and the President’s Circle Fund for Undergraduate Research, McCabe returned to Gibraltar during spring break the next year to conduct further research.

The project, McCabe says, was a good starting point for his current work, which is similar but has a much larger scale—looking at all primates.

“I think that having a diverse background in anthropology allowed me to be able to step back and apply my work in a broader context,” he says. “That’s one of the big things the fellowship deals with: being able to take something and extrapolate on it and ask, ‘How does this fit into the big picture?’”

McCabe’s and Brown’s experiences are emblematic of the Department of Anthropology’s dedication to undergraduate research—a commitment that was recently commended by an outside trio of scholars.

“The level of student involvement in undergraduate research is, frankly, astounding to us,” notes the department’s decennial external review, conducted in 2010 by anthropology professors James M. Calcagno of Loyola University, Timothy K. Earle of Northwestern University, and Judith T. Irvine from the University of Michigan.

“We know of no other institution in the country that produces such an outstanding record in anthropology of student research publications and presentations.”

Challenging students to perform at this level helps them shine as undergraduate scholars, says Kuijt. “We facilitate their research, asking, ‘What are you interested in?’ and ‘How can we help you make this happen?’” he says. “But they are the drivers in this—it is that sense of excitement and investment that they have in the project that provides the motivation.”

This student-focused learning environment also allows them to develop skills that are fundamental to future success, he says.

“Our students are going to conferences,” says Kuijt, “and learning how to write grant proposals, organize field work, conduct research, write it all up, make it relevant, and sniff out what the big stories are.”

“Talk to the professors—they are there to help you find what you are passionate about and are so helpful,” she says. “And the research opportunities are unparalleled.”